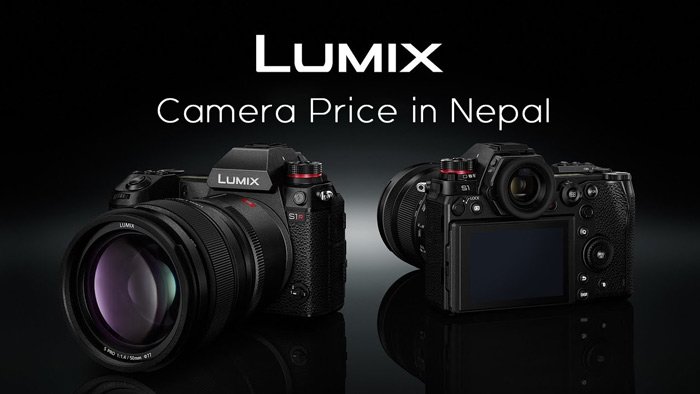 Panasonic‘s recent mirrorless camera model which is S series cameras including S5 and S1R price in Nepal is much higher than the previous models Panasonic Lumix Gh4 and Gh5 cameras. Panasonic’s cameras are known for their great video features with amazing image stabilization capability. In this article, we are going to discuss the Panasonic camera price in Nepal including the latest S series cameras and the previous models like Panasonic G7, G85, and G9 series which is a budget camera from Panasonic, and also the very popular Lumix Gh4 and Gh5 cameras.

They don’t really focus on photography that much, but that doesn’t mean you can’t take a picture from that camera, and also the autofocus is not that great like the Canon Dual Pixel autofocus system, they just have contrast-detection autofocus technology which is not that great, It is usable for some situations but not for all.

Panasonic has extremely excellent technology on the basis of a professional camera, especially for videography. They are always on the edge of developing their technology to improve the current camera quality.

It has never disappointed to surprise the entire camera lover and its customers. Especially the new mirrorless cameras which come with amazing video features like 4k 60 and great image quality without any heating problems, unlike the Canon EOS R5 camera which shuts down after some time, if you use the high-quality mode.

LUMIX G7 is one of the best and yet cheapest 4k cameras right now, which is great f you are YouTube Creator or walk to get into filmmaking to learn all the basic fundamentals without investing too much. It is built on the next-generation mirrorless interchangeable lens camera standard (Micro Four Thirds) offered by Panasonic. It is very light and compact in size if you are planning to travel more than It might be helpful for you are carrying on your trips.

Special moments are missed because you did not press the shutter at the right moment. LUMIX G7 featuring 4K video technology can pause and extract that perfect photo moment in time from 4K video. 4K video provides nearly 4X times the number of pixels than Full HD video. Video will feature superior definition and crisper detail than those recorded in Full HD with a camcorder.

Unwire Your Creativity via Wi-Fi

The Panasonic Image App connects by Wi-Fi to the camera and grants control over various functions via a smartphone or tablet device.

The Panasonic Lumix DMC-G85 is the bigger brother of the last-gen Lumix G7 model, and It is a little better in every area as compare to the last model. It is an SLR-style mid-range mirrorless camera. It features 4K video capture, 2nd-generation 5-axis image stabilization, and a 16MP Four Thirds sensor with no optical low pass filter. G7 sold as the Panasonic G80, G81, and G8, depending on the different markets and countries.

Though Panasonic has not come outright and said it, the G85 is the successor to the G7. More a refinement than something new entirely, both cameras share seemingly identical bodies and offer twin control dials, plenty of customizable buttons and fully articulating touch interfaces. Panasonic G7 camera price in Nepal is Rs. 72,990.

For current users, I highly suggest doing the following:

The Panasonic Lumix DC-G95 is another solution that comes with great features if you are planning to capture great content. G90 and G91 sold outside North America, which uses a different type of display. It is a mid-range 20MP Micro Four Thirds mirrorless camera. Panasonic says it’s designed to be equally adept at both stills and video, though we don’t wholly agree.

It offers an extensive degree of direct control, a flip-out touchscreen, and in-body stabilization: a combination that’s unusual at this point in the market. This is enough to make it an attractive enthusiast stills camera, but a significant video crop undermines its video-making credentials. Panasonic G7 camera price in Nepal is Rs. 94,990.

Reviewing cameras are always difficult because the end result is what “you” see in a picture/video. It’s the same as buying a car or a house. You need to test it out yourself before saying “yes, I’ll buy it.” This is a must if you don’t really know about the mechanics of a camera because there might be something on this camera that doesn’t feel right to you.

But if I had to summarize it, it’s a great camera that fits all beginners and pros. The software is well-made and is still compact enough to put it in your backpack. I see this more for vloggers but for those who live in a sports world that need 4k 60fps, this camera doesn’t have it. A simple menu layout that makes it easy for beginners, and the in debt customization and modes that makes it feel like home for a professional.

Like its predecessor, the GH4 features a weather-sealed magnesium alloy body, while offering increased resolution on both the OLED monitor and electronic viewfinder. It also features built-in Wi-Fi with NFC technology, in-camera creative controls, and high-speed 49-point autofocus in both photo and video mode. Use within the communication range of the device to be connected.

To be tough enough to withstand heavy field use, the main structure of the GH4 is composed of a magnesium alloy full die-cast front/rear frame. It also features splash / dustproof construction by sealing every joint, dial, and button. The shutter unit allows a max. 1/8000 shutter release and is also redesigned to be even more durable for approx. 200,000 actuation. Panasonic G7 camera price in Nepal is Rs. 1.80,900.

The Panasonic Lumix DC-GH5 is the fifth in the company’s industry-changing video and stills ‘hybrid’ lineup. With its 20MP Four Thirds sensor and deep video-centric feature set, it looks likely to pick up where the GH4 left off as a favorite of indie filmmakers and photographers whose interests venture into the realm of motion picture work.

The GH5’s feature set moves on suitably far from its predecessor that the company says the GH4 will remain in its lineup as a lower-cost option for users who don’t need the additional capability that the GH5 brings.

For many users, the addition of in-body stabilization and 4K video without cropping might be enough to make the camera a worthwhile upgrade, but Panasonic has revised and improved almost every aspect of the camera’s behavior and performance. Panasonic G7 camera price in Nepal is Rs. 2,24,990.

Panasonic went big with its first-generation Lumix DC-S1 full-frame mirrorless camera, both in size (it’s as hefty as some SLRs) and price, positioning it around $2,500, toward the high-end of the range for a 24MP model.

It’s targeting a more entry-level market with the Lumix DC-S5 ($1,999.99, body only), but instead of cutting back on features, the S5 is a bit more capable, offering improved video features and better autofocus. It’s a great entry point for full-frame imaging and a winner of our Editors’ Choice award.

LUMIX S5 is a hybrid full-frame mirrorless camera that achieves both excellent performance in photo/video in a compact body designed for aspirational content creators.

At the heart of the camera, the LUMIX S5 contains a 24.2-megapixel 35mm full-frame CMOS sensor that boasts a wide dynamic range and high sensitivity performance made possible by sufficient light condensation. The LUMIX S5 further realizes recording maximum ISO51200 crystal-clear high sensitivity video with the adoption of the Dual Native ISO technology.

The LUMIX S5 boasts high-speed, high-precision AF in both photo shooting and video recording that is made possible with advanced deep-learning technology featuring real-time detection of the subject’s type and parts such as human eye, face, head, and body. Panasonic G7 camera price in Nepal is Rs. 2,35,590.

The Panasonic LUMIX S1R yields unprecedented image quality with high resolution, rich gradation, and superior color reproduction. A high-speed, high-precision AF system based on advanced control technology over the lens, the sensor, and the new Venus Engine enable the user to capture the precise moment in the finest detail.

The Panasonic S1r is a mirrorless camera with a 47-megapixel sensor. As such, it provides highly detailed pictures which can be enlarged to wall-size prints. With all these pixels, one can crop the image for the perfect composition.

The camera is about the size and weight of the digital SLR, and it is ideal for the meticulous worker who takes time to compose his photographs. Its autofocus system works best when dealing with static subjects. For landscape and portraiture photography, this is fine. But recording sporting events with fast action, the continuous focus is not as reliable as those found on cameras such as the Sony a7 III, the Nikon F-series, or the Canon EOS cameras. Panasonic G7 camera price in Nepal is Rs. 4,78,900.

For those who wish to use manual focusing, this camera is almost perfect. With its kit lens, there are several focusing aids. A portion of the image can be enlarged to see the most delicate details for focusing, and a color fringe can be projected on edges when they are in focus.

I was impressed with the viewfinder. It shows the distance of the subject and the depth-of-field for a given aperture. For old-timers, this allows them to set the hyperfocal distance on a lens. This setting is invaluable when the goal is to maximize the depth of field.

This camera is ideal for scientific work. It can be made to operate in a vibration-free mode. With such a stable platform, this ensures the sharpest obtainable pictures when the camera is mounted on either a telescope or a microscope.