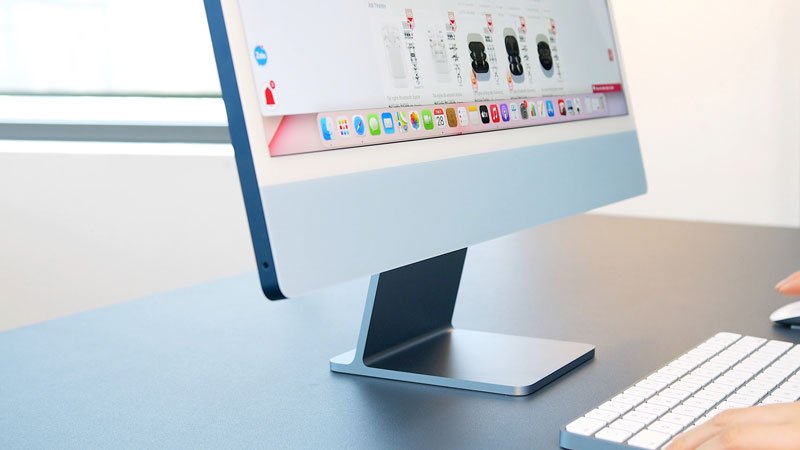 Apple’s iMac is an all-one Computer that is based on Mac OS. It has ruled the computer for a long time because of its legendary design, compact size, and performance.

Apple’s latest M1 chip is doing great on their laptop devices and they are already decided to put it on their iMac series which is awesome, we have already seen the M1 is way faster than the intel chipset which they are using for a long time.

We all know that Apple products don’t come at a low price we have to pay a good amount of rupees for them.

In this article, You will find the overall update on the apple iMac and iMac Pro with their price in Nepal.

The iMac and iMac Pro series are best for those who are on looking for a device on which they can Edit Pictures, Video editing, and 3D modeling then iMacs are just perfect. Also, the benefit side is, you can get access to software exclusive to Apple, which is an added bonus who can do the maximum utilization.

And although the price of Apple iMac and iMac Pro in Nepal is quite high as compared to the other countries which is obvious because importing products costs money right and also you have to pay taxes, most professional users want these machines because of the design and the simplicity of it.

Why Apple’s Ecosystem Beats All Others?

First, there’s one thing that puts Apple above all its competitors. It’s the fact that they control their hardware and software, a feat that no other tech brand has achieved.

This gives them the freedom to tinker with their products as much as they want and control different aspects of their devices in a way that makes the inter-dependence of their gadgets much more seamless.

They decide what to add or remove from the hardware and how to supplement that through the software to not just improve user experience in the ecosystem, but also convince more users to immerse themselves in it.

Instead of considering Apple’s ecosystem in terms of the number of people or devices, a different approach is to consider the number of experiences Apple offers.

This is where Apple’s true ambitions become visible. By using an iPhone, a customer doesn’t just receive one experience per day. Instead, nearly everything that is consumed on the device has the potential of leading to a good (or bad) experience.

This is why Apple’s control of hardware, software, and services plays such a crucial role. Apple’s ecosystem likely consists of tens, if not hundreds of billions, of experiences in a single day.

The Apple iMac 21.5-inch model is the cheapest model in the Mac series which comes with a smaller display and lower performance for day-to-day use. The 21.5-inch iMac is absolutely what you would expect from an entry-level Apple desktop Mac.

Since the last significant design upgrade in 2014, Apple has changed almost nothing about the iMac’s outward appearance till this date and finally, apple already announced the new Design for the 21.5-inch model which is much thinner and comes in 7 different colors.

It has used the same 21.5-inch screen, 4K resolution, P3 color gamut, and 500 nit brightness through every incremental upgrade.

But the white bezels don’t look that great though It is much smaller than the previous models the white looks much outdated to me.

We can expect better design on the 27-inch model, let’s see what Apple thinks about that.

The 21.5-inch iMac with a 4K display comes with 8th generation Intel Core i3 or i5 chipsets by default. Users can also configure it at the time of purchase to include an i7.

For graphics, customers can select between the Radeon Pro 560X with 4GB of GDDR5 memory, or go all out with a Radeon Pro Vega 20 with 4GB of HBM2 memory. However, users needing more power who are willing to spend that much will likely be better off with the 27-inch iMac or the iMac Pro.

What You Can Upgrade?

Unlike its 5K counterpart, there is no rear door to access the RAM, but the RAM is upgradeable if the machine is disassembled. The smaller iMac has the same ports as the 27-inch iMac: two Thunderbolt 3 and four USB-A, an SD card reader, a headphone jack, and a gigabit Ethernet port.

If users need more graphics capabilities, Thunderbolt 3 allows users to attach powerful external GPUs, such as those from Black Magic. This means users can purchase a new external GPU instead of replacing the entire iMac when requiring newer specs.

Users can also use the Thunderbolt 3 ports to attach external monitors. The iMac 4K can drive a single 5K display or two 4K displays. Apple had recently partnered with LG to produce official monitors for Macs, like the LG 23.7-inch 4K UltraFine Display.

The more expensive configurations should handle gaming fairly well. However, since macOS isn’t nearly the gaming platform just like Windows, you need to use Bootcamp to get the best gaming experience which is a little hustle for some users.

Is the 21.5-inch iMac upgradeable?

No, the 21.5-inch iMac does not have user-installable RAM or other components either.

Apple includes the following in the box:

Last year’s new Apple iMac 2020 27-inch is the company’s latest all-in-one PC and comes with some choice hardware upgrades that make this one of the best devices creative professionals can buy right now.

So much so, in fact, it takes the top spot in our roundup of the best computers for graphic design.

Keeping that iconic look that has made previous iMacs such a hit with creatives, the iMac 27-inch 2020 now includes cutting-edge components from both Intel and AMD, as well as super-speedy solid-state drives (SSDs) across the board and an increase in RAM, leading to performance that blows the competition – especially Microsoft’s Surface Studio 2 – out of the water.

In 2021, it looks like there might even be an update to the iMac in-store. Rumors have pointed to a potential reduction in those mighty bezels, and a slimmer profile overall, plus the addition of the latest and greatest M1 chip. If these rumors do come to fruition, then that may be good news for the 2020 iMac, which is bound to get a price cut.

Back to the 2020 iMac, While it’s not quite the powerhouse workstation that the iMac Pro is, nor does it have the newly released super-speedy M1 chips that have launched with the latest MacBook Pro, MacBook Air, and Mac Mini (yet), with the ability to order a configuration with a 10-core processor (a first for the standard iMac), and a new AMD Radeon Pro 5700 XT with 16GB of GDDR6 memory (which is the model we’re testing here), it’s not far off.

The Apple iMac 27-inch (2020), then, is a serious machine for creative professionals who are looking for a compact yet powerful all-in-one – with some great features that will appeal to people working from home as well.

If you have an older iMac in a production environment, you’ll reap the benefits if you invest in the new iMac. Don’t worry about Apple’s commitment to supporting you in the next several years. They will. And you can rest assured that your software will be able to get the most out of the iMac CPU.

If you bought an iMac or even an iMac Pro within the past year, the new iMac’s speed advantage is incremental. Consider waiting for the second or even third generation of Apple silicon Macs. By then, there could be native versions of the software you use for Apple silicon, ensuring that you’ll get the most performance.

Like the last iteration of a memorable design, the new 27-inch iMac leaves quite an impression. It has new features that users have been waiting for and will be a very serviceable machine while Apple silicon Macs are introduced, and the software evolves. The time is right for a change, but it’s nice to see this iMac go out as a winner.

The iMac Pro Is the bigger and better version of iMacs which is specially designed for professional creators It was announced in 2017 for the first time. The iMac Pro was right away aimed at heavy users, especially video editors, as estate back then by Apple: “iMac Pro is the fastest, most powerful Mac ever made, and delivers incredible compute power for real-time 3D rendering, immersive VR, intensive developer workflows, high megapixel photography, complex simulations, massive audio projects, and real-time 4K and 8K video editing.

Video editors can edit up to eight streams of 4K video, or edit 4.5K RED RAW video and 8K ProRes 4444 at full resolution in real-time without rendering”. Indeed, this beast machine was accepted and utilized by pros for a variety of content creation applications (editing, VFX, music production, color grading, and more).

Looking at the situation for right now the only Macs that utilize Apple Silicon M1 are the Macbook Pro which is a 13-inch model only, Macbook Air, and the Mac mini. We are already got the announcement from Apple itself with the new design changes on the upcoming iMac 21.5-inch model which is coming with the M1 chipset.

They’re also a bunch of rumors that the iMac Pro will be redesigned with its own silicon. The new models will slim down the thick black borders around the screen and do away with the sizable metal chin area in favor of a design just like on the Apple’s Pro Display XDR monitor and also come with different colors also.

According to resources, the iMac redesign will be one of the biggest visual updates to any Apple product this year. So there you have a completely redesigned iMac and iMac Pro with an M1 chipset.

Apple has already confirmed that the iMac Pro is discontinued. You still can purchase the basic model on the Oilzstore if you want to, however, you no longer have the option to change the spec of the machine, so it’s the 3.0GHz, 10-core Xeon W model with 32GB RAM, 1TB SSD, and Radeon Pro Vega 56 with 8GB HBM2 memory or nothing.

Because we all know Apple is working on the M1 chipset model so we just have to wait to see the new model of the iMac pro which might come with the new design as we already saw on the 21.5-inch iMac models.