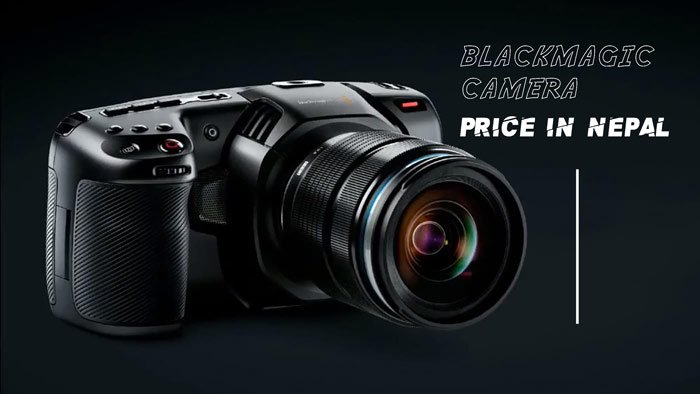 Blackmagic pocket cinema camera are the best budget cinema cameras in Nepal in terms of size and usability. It has amazing video quality because we all know it is made for professional filmmakers, that’s why this is more of a video camera. If you are thinking of production quality from the compact camera then this is the way to go, it has log format, shoots 6k, 4k in high frame rates, and if you are worrying about lenses then it is compatible with Canon EF-S/EF lenses so you can you canon lenses on your Blackmagic pocket cinema camera.

Blackmagic Pocket Cinema camera is by far the best budget cinema camera in Nepal especially if you want to shoot high-quality Raw images. It is a compact and lightweight camera and supports cine-style with its Super 35 sensor. BMPCC 6K records up to 50 fps 6144 x 3456 video, but in a boon to lens connoisseurs everywhere, it features an active Canon EF mount, letting users take advantage of an expansive series of EF/EF-S–mount lenses available from the decade. The compact BMPCC 6K retains the familiar controls and menu layout just like on the 4K version in a minimally deeper form to accommodate the EF lens mount. Features such as ISO support up to 25,600, 13 stops of dynamic range, 1920 x 1080 monitor output, and a bright 1920 x 1080 touchscreen 5″ LCD are carried through from the BMPCC 4K as well. Professional audio support includes a mini XLR input with phantom +48V power and four built-in mics. The BMPCC 6K is fashioned from a carbon fiber polycarbonate composite that is both lightweight and durable. The other additional features include lens metadata support, 3D LUT application for both monitoring and recording, up to 21.2MP still image capture, and a multifunction grip that enables single-handed operation. Sync multiple cameras for a concert, event, or other multicamera shoots by linking an external timecode generator to the BMPCC 6K’s internal timecode generator (accessed via the 3.5mm audio port).

In addition, you will get the DaVinci Resolve Studio activation key, the BMPCC 6K comes with a power supply offering simultaneous battery charging, an LP-E6 battery, a lens port cap, and a camera strap. Blackmagic pocket cinema camera 6k price in Nepal is Rs. 3,35,000.

You also get a license for Davinci Resolve Studio 17 which makes editing 6K Blackmagic Raw simple once you get past the initial learning curve and the Davinci Resolve handles much better Raw video than the Adobe premiere pro. One of the benefits of working with BRAW files is you don’t have to worry about that you underexposed your images or the color of your skin in a different place you can adjust those things in the post-processing because Raw gives you a lot of flexibility in your footages.

The Base variant of the Blackmagic Design Pocket Cinema Camera features a 4/3″ sensor and only captures up to 4K(4096 x 2160 DCI) images, unlike the 6K version model which we talked about above in this blog. It shoots 4K up to 75 fps in a variety of codecs including Blackmagic Raw at several bit rates and various ProRes 422 options. After the 6.6 updates, the BMPCC 4K offers up to 80 fps in a 2.8K raw mode for 4:3 anamorphic and up to 75 fps in a 4K raw mode in 2.4:1 widescreen which is really helpful if you want to shoot on higher frame rates. The slow-motion rates up to 120 fps are available in 2.6K raw for Super16 lenses and in cropped Full HD. 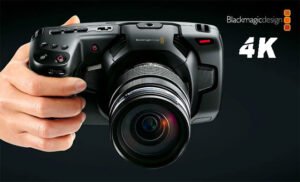 After the update, It operates much easier with support for the Pocket Battery Grip and a built-in horizon level function. It also includes support for additional languages, USB PTP control, customizable frame guides, and up to 8x pinch-to-zoom function, Now you can embed custom LUTs as metadata in Blackmagic Raw for better post-production quality.

The Micro Four Thirds lens mount accommodates the original, lightweight Pocket Cinema Camera lenses, and can be used with PL, C, EF, and other lenses with the use of separately available adapters. A dual-native ISO up to 25,600 is helping for low-light video capture capability, and it has whooping 13 stops of dynamic range to provide rich HDR images.

It supports CFast 2.0 and SD/UHS-II card slots or employs the USB Type-C output for capturing longer clips to an external drive. The Pocket Cinema Camera 4K has a 5-inch touchscreen LCD screen which reduces the need for an external, onboard monitor, while a full-sized HDMI port enables you to output a signal to a larger display. The menu and interface are the same as the ones found on the URSA Mini camera, and 3D LUTs can be applied for monitoring in your look when you’re ready. The Audio features include a mini-XLR input with phantom power for pro-style mics. It also features a 3.5mm jack, and an internal stereo mic. Additional features include the same Blackmagic OS as the URSA Mini and Bluetooth remote control. A license key for DaVinci Resolve Studio is included so you don’t have to worry about the editing software. The Pocket Cinema Camera 4K’s carbon fiber composite build provides lightweight strength and durability, and power options include running off the included Canon LP-E6 type battery or the included power supply. Blackmagic pocket cinema camera 4k Price in Nepal is Rs. 1,73,000.