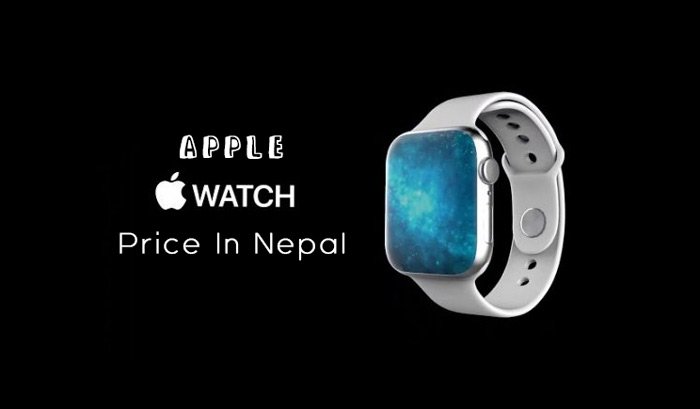 If you are considering buying the best smartwatch possible which has a great design and features than you might be looking for Apple Watches. We all know the Apple products provide different quality products, and they have their own reputation for delivering products to their consumers. In this blog, We are going to discuss all the Apple Watch Series including the price in Nepal.

Apple has its own lineup for smartwatches like Apple Watch SE for starting and the Apple Watch Series 6 comes with 44 mm size, Wi-Fi, and LTE supports which is the most expensive one.

If you are looking at the price of these Apple watches then you will get different variations on them depending on the old models and the new ones. The new Apples Watch Series 6 has upgraded features and the SE is like the Mini version of the Apple Watch Series which comes with almost all the features that you need on the good smartwatch but on a small package.

It isn’t designed for people looking to upgrade from the Apple Watch Series 5. After all, most of the internals of the Apple Watch SE is the same as the Series 5. Instead, Apple has created the perfect mid-level Apple Watch that is meant to entice first-time buyers and upgraders from older models — like the Series 4 and older —which already are used to not having an always-on display.

The Apple Watch SE is also missing the ability to use the ECG app (which has been around since Series 4) and the new Blood Oxygen app. Plus, it also only comes in an aluminum finish, likely to keep the price solidly in the middle of the pack, so you can’t take advantage of the more premium materials offered on the Apple Watch Series 6. The Apple Watch SE Price In Nepal is Rs. 49,000 (expected) and Rs 51,000 (expected) respectively for 40 mm and 44 mm.

I’m a former Fitbit user, which was also a very good watch. So switching from Fitbit software and tracking to Apple Fitness was a change. After using it for almost a week, I can say I appreciate the customization of Fitness.

It’s doing a great job at making me get off my booty. I do loving closing my rings. Makes it feel like a game that I MUST win!!

I’m using this a few times a day on cellular mode. I text, take calls through my AirPods, and listening to streaming music while walking the dogs several times a day. Furthermore, I’m typically up between 5-6 am and in bed by 11 pm. At the end of the day, I’m at less than 50% charge.

While I wish I would last more than a day in a charge I feel like I’m using it a lot throughout the day and it does charge pretty dang fast.

Apple watches series 3 comes with Space Black stainless steel chassis and Space Black stainless steel Milanese Loop band. It is designed for users looking for the next generation of connectivity, Apple’s Watch moves your iPhone’s apps and functions to your wrist, so you can do more while leaving your phone in your pocket like picking up calls, replying to messages, watching notifications n all.

Apple Watch connects to your iPhone via Bluetooth 4.2 and displays notifications, apps, and more on its 1.5″ display. It can also connect directly to the Internet thanks to 3G and 4G LTE cellular compatibility and 802.11b/g/n Wi-Fi. The internal battery lasts for up to 18 hours of normal use and is recharged with an included inductive magnetic charger. The Apple Watch Series 3 Price In Nepal is Rs. 78,000 and Rs 56,000 respectively for Stainless and Aluminum model.

Use : The utilization of a watch is not as much as what is costs. You cannot do something new in the watch at your will, but you do get used to the convenience of alerts, notifications, calling. It is useful things depend on the situation.

Design : Fit and finish is perfect as what you expect from apple. Black watch have sleek looking screen and most of watch faces dont reveal the bezel so it looks end to end.The seamless integration of watch with iphone makes you feel wow , the ability to take calls, siri talkback and smooth UI makes it the best watch out there

The Bad Starting prices are higher than last year. Battery life still won’t last past two days. Watch face options are still very limited in choice and function. It only works with iPhones. The Bottom Line The Apple Watch Series 4 is the fastest, most connected, and best overall smartwatch around, but its battery life and watch face options often fall short of the competition.

If you use it just for notifications and step counting, it’s probably overkilled, but it’s able to handle more advanced features better than any other smartwatch I’ve tested. Mapping, music, workouts, calls, texting, podcasts… most of the stuff I could imagine wanting from a smartwatch works better than ever before. The only real bummer is that I still don’t feel like I can trust Siri to do everything I’d like reliably, and that’s more of an intermittent hassle than a real killer.

If you’re looking at this Watch with an eye toward the health features, I have to admit that they’re difficult to test: the new features could be very compelling to a lot of people. Passive monitoring for heart problems and falls could literally be lifesavers, but they aren’t all available yet, and we’d need to see third-party lab testing to really make a call there. The Apple Watch Series 4 Price In Nepal is Rs. 68,000 for 44 mm version.

Apple Watch Series 5 is powered by the Apple S5 processor. The tablet comes with a 1.78 inches LTPO OLED capacitive touchscreen and 448 x 368 pixels resolution. The screen of the device is protected by Sapphire crystal glass.

Always-On Retina Display See the time or checkout your workout metrics with just a touch or glance on the new and remarkable always-on Retina display.

Daily Activity Tracker Train in a smarter way with your perfect workout companion that tracks your progress and helps you crush your everyday goals. Fingerprint.

Connectivity Manage activities of your iPhone, even while being away from it with the built-in cellular feature that keeps you connected, always

The build quality of the Apple Watch Series 6 is fantastic, especially the stainless steel version that I have for review, but it’s also a massive fingerprint magnet. The right side of the watch has a digital crown and a single button just below it.

There’s a cutout for a speaker on the left, and the health sensors are on the underside of the case. My watch came with a black sport band, which is made out of silicone and is one of the most practical bands to own since it’s quick to dry and requires very little maintenance.

Apple promises up to 18 hours of battery life on one charge, and the Series 6 is said to be able to charge quicker than Series 5. Without the always-on display, I was getting close to two full days on one charge, but when it was enabled, I was just about able to cross one full day.

These times are still way better than Apple’s claims. When using the only LTE, I was averaging about a day and 15 hours, which I consider impressive. My usage time with the watch across all these scenarios was roughly the same, at about four and half hours. The Apple Watch Series 6 Price In Nepal is Rs. 59,000 and Rs 73,000 respectively for 40 mm and 44 mm.