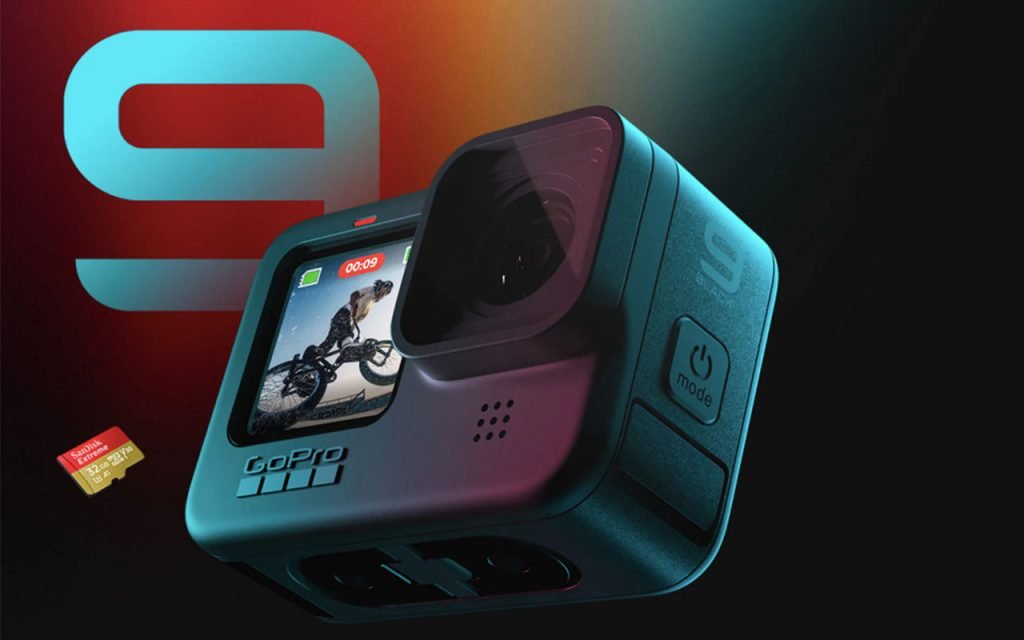 GoPro Hero 9 price in Nepal is a little more expensive than its previous models GoPro Hero 8 and Hero 7, but the good thing is we get everything bigger and better including image quality and features that we will talk about in later on thing blog.

First thing: Its actual size. The Hero 9 is noticeably larger than last year’s Hero 8. A bit thicker, a bit wider, and a bit taller. This never got in the way of where I wanted to mount it or how it felt to carry around, though, and it still has the same sized dual prongs for mounting that are magnetically stowed on the bottom of the camera. That means that you don’t need a separate case or housing to attach accessories like you did with the Hero 7 and older models.

With the larger size comes a larger back touchscreen, 2.27 inches diagonally. It has the same USB-C port, microSD card slot, and battery compartment on one side, along with the start/stop button on the top and the power and mode button on the side.

There is also this weird latch-looking piece on one side that I thought was removable, but it is not. GoPro calls this the “Drain Mic” and explained that it is designed to drain itself after the camera is submerged, which should make for clearer audio when you’re coming up out of water.

We will talk about the GoPro Hero 9 price in Nepal, so stay tuned for that. For now, let’s see the features that stand out in the latest GoPro model.

Hero 9 Shoots stunning video with up to 5K resolution, perfect for maintaining serious detail even when zooming in. It Packing with the new 23.6MP sensor that’s an an absolute powerhouse, HERO9 Black brings lifelike image sharpness, fluid motion, and in-camera horizon leveling that always impresses.

5K video on its own isn’t that useful for most of us, since very few devices or streaming services support anything over 4K, but the extra pixels mean you can crop your video and still end up with 4K footage. With the huge field of view in a GoPro, the ability to crop and zoom in on your subject after the fact is a tremendous advantage.

It Captures crisp, pro-quality photos with 20MP clarity. And with SuperPhoto, HERO9 Black can automatically pick all the best image processing for you, so it’s super easy to nail the shot.

Hero 9 allows you to do a Live stream in 1080p on social, get HyperSmooth stabilization as you broadcast via the GoPro app, and save footage to your SD card to check out later. Connect HERO9 Black to your computer to broadcast in 1080p full HD. Use GoPro mounts to create your ideal webcam⁷ setup.

Hero 9 record mesmerizing time-lapse scenes as you move on the road, on foot, or anywhere else. TimeWarp 3.0 condenses time, capturing moments like nothing else. Speed Ramp is a new capability that

Everybody loves slow-mo features on their smartphones right. But if you truly want to get a crazy slow-mo then GoPro Hero 9 everything looks epic in slo-mo. Ultra-high frame rate 1080p240 video—with HyperSmooth 3.0 stabilization—allows up to 8x slow motion for this ever-popular effect.

Another major update includes a bigger 1720mAh battery. It is a significant upgrade from the 1220mAh battery that Hero 8 offered. The company claims that this unit will offer 30% more usage than the previous iteration. Furthermore, the battery is also optimized for cooler conditions.

The second major update is to HyperSmooth, which is now at version 3.0. Designed to cut down on camera shake even in incredibly jolting and bumpy filming scenarios, the latest version is nothing short of astounding.

GoPro sent me a radio-controlled car to test this out, and I drove it through the roughest stretches of the woods around my house. The resulting video looks like it was shot on a professional gimbal; it really is that smooth.

Finally, let’s talk about the GoPro Hero 9 Price in Nepal and where you can find it online if you are planning to buy one of these. If you want to buy offline, then you can go into the local camera store and buy it. The price might be different as compared to the online model, but I’m sure it will be very similar.