Skip to content
If you want to know the Latest GoPro price in Nepal you are in the right place. There are a bunch of GoPro models which is available in Nepal include Latest GoPro Hero 9, Hero 8, Hero 7, and also the Hero 6 which is much cheaper than the latest models.  In this blog, we are discussing GoPro Hero 8 and Hero 8 Black Price In Nepal.

The GoPro Hero 8 Black is a midsection camera in GoPro’s action camera lineup, sitting below the flagship Hero 9 Black and just above the Hero 7 Black. For most people, it’ll be the best choice, once you’ve understood its value – while you miss out on the new flagship’s front-facing screen and 5K video powers, its performance is otherwise largely the equal of its pricier sibling.

Why buy the Hero 8 Black over the even cheaper Hero 7 Black? If you want the cliff notes, this action camera has a slimmer form factor, double the shockproof rating, a foldable built-in mount, a new wind-resistant microphone, and some great new software features for making your videos look better in action. It’s also compatible with GoPro’s Mod accessories – while these were slow coming to market, the Light Mod, Media Mod, and Display Mod are all now available to buy all the modes, which is a great deal.

The Hero8 Black looks a lot like last year’s model Hero7 at a glance, but closer examination shows that GoPro has done some work on the body design. It’s just a little taller and wider (1.9 by 2.6 by 1.1 inches, HWD), but just by a matter of millimeters. The lens cover is larger and doesn’t extend quite as far out from the body. 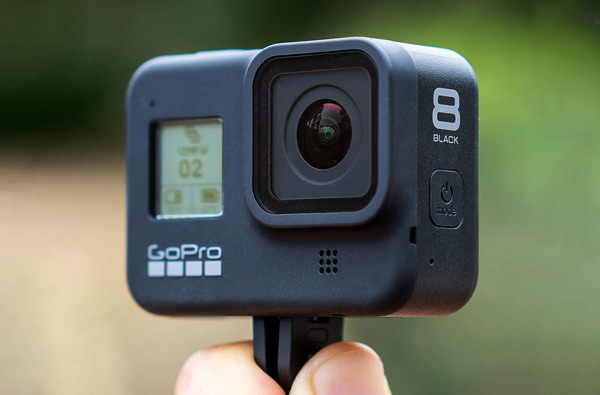 The exterior frame is metal, with rubber around the edges and faceplate. The camera itself is built tough to survive drops—its light 4.4-ounce body helps in that regard as well. It’s also waterproof to 33 feet, without the need for additional housing.

And GoPro is definitely targeting vloggers with some of the Hero8’s features. Video stabilization has been upgraded all around and is even more effective if you slightly narrow the angle of view of the lens. Plus there are features like TimeWarp, a motion time-lapse, which is pitch-perfect for social media.

The big win of the cage-less design for many will be the new Mods that can be added to the Hero 8. We mentioned the Media Mod. It adds a 3.5 mm mic jack, HDMI port, and a shotgun mic, along with two cold-shoe mounts. (The “cold” in cold shoe means that the mount point does not provide power, as opposed to a hot shoe, which does.) It’s also needed to attach other Mods, like the flip-up screen for previews and the LED light. 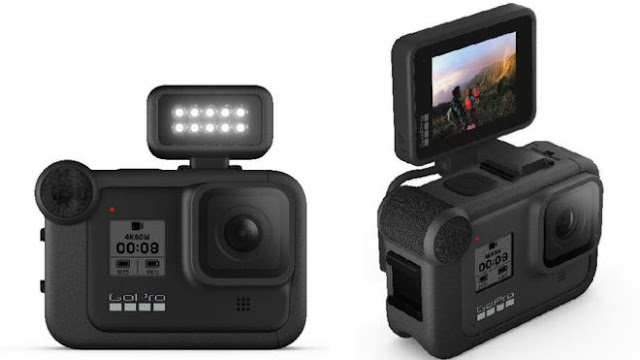 The new Hero 8 design and Mods make it feel like GoPro’s target market is shifting from the strap-it-to-your-head-and-shred crowd to the vlogging crowd. It’s a move that makes sense—YouTube has a lot more vlogging than shredding going on—but it also speaks to how well GoPro has already solved the hardcore adventuring side of the equation.

A GoPro is a small camera the takes the best qualities of point-and-shoots and camcorders and packs them into a rugged frame that’s smaller, waterproof, and virtually indestructible. That’s where GoPro Hero 8 Action Camera steps in. It comes with Digital lenses. It comes with Wi-Fi, Bluetooth support, GPS Enabled, Connects to GoPro App. Has SD card support.

Perfect Usage
The GoPro Hero 8 Action Camera lets you tap through four lenses: Narrow, distortion-free Linear, Wide, and SuperView. It comes with a radical enhancement to HyperSmooth, HyperSmooth 2.0 now has multiple levels of stabilization. Support 1080p Live Streaming. Has TimeWarp 2.0 feature with automatic speed selection. Capture super stabilized time-lapse videos while you move through an activity. You can add lights, a mic, and more to get your creativity on.

Awesome Built Quality
The GoPro Hero 8 Action Camera comes with Improved HDR. The LiveBurst mode captures 1.5 seconds before and after you hit the shutter. Has Night Lapse Video. Equipped with 3 Mics for High-fidelity audio. It is equipped with a Rugged and Waterproof design. It has hands-free support with 14 voice commands. It is a 12 MP action camera. Live Burst feature. The sensor type is CMOS.

The GoPro Hero8 Black price in Nepal is actually the same in different stores, which you can check out on the list below.