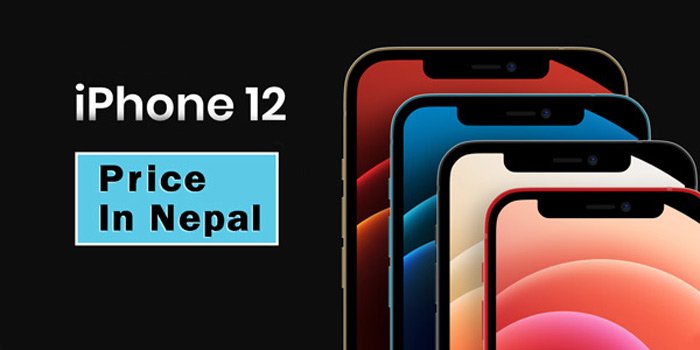 Apple iPhone 12 has a premium new design. Most people are interested to buy this phone. In this article, we are going to discuss iPhone 12 prices in Nepal including its features and performance. It has an attractive design, a straightforward and complete approach to 5G, great cameras, premium features like waterproof and dustproof body, and wireless charging support, and even better performance.

However, the lack of a charger inbox and limited base storage are drawbacks. Without any further discussion, let’s take a look at the specifications, features, price, and availability of the iPhone 12 in Nepal.

The iPhone 12 highlights a 6.1-inch (15 cm) display with Super Retina XDR OLED technology with a resolution of 2532×1170 pixels and a pixel density of  460 PPI. It has an upgraded Ceramic Shield cover which has a 4 times better drop performance and is more robust than any smartphone glass.

It has rounded corners that follow a beautiful curved design, and these corners are within a standard rectangle. When measured as a standard rectangular shape, the screen is 6.06 inches diagonally (the actual viewable area is less).

iPhone 12 has the Apple A14 Bionic. It is the world’s first smartphone chipset to be based on the 5 nm process. It consists of a Hexa-core chipset with two high-performance cores and four efficiency cores. The quad-core GPU has improved memory configuration. The company claims that their new chip is 50% faster, both in terms of CPU and GPU performance, compared to other competing chipsets.

The new neural engine has 16 cores and boasts a boosted performance of up to 80%. According to Apple, it is capable of computing 11 trillion operations per second. Similarly, the second-generation ML accelerators promise up to 70% faster Machine Learning computations.

Both rear-facing cameras now support Night Mode for both photo and video at full resolution. Portrait mode has received improvements and works with Night Mode as well. Smart HDR has been improved (now called Smart HDR 3). This iPhone model is the first capable of shooting 10-bit high dynamic range Dolby Vision 4K video at up to 30 fps which allows for greater brightness and deeper shadows.
The front-facing, TrueDepth camera features a 12-megapixel camera with an f/2.2 aperture. This model also added Night Mode to the front-facing camera.

The iPhone 12 include mostly the same sensors found on prior iPhone models going back to the iPhone X. These include an accelerometer, gyroscope, barometer, proximity sensor, ambient light sensor, and a digital compass. The device also includes the Face ID sensor for biometric authentication.

Both phones run iOS 14. The devices come with the stock iOS apps, such as Safari, Weather, and Messages and they include Siri, the personal assistant in iOS.

iPhone 12 is now selling from authorized resellers in Nepal like olizstore, evostore available for purchase. You can check out the price list of different variants on iPhone 12 in the below list.