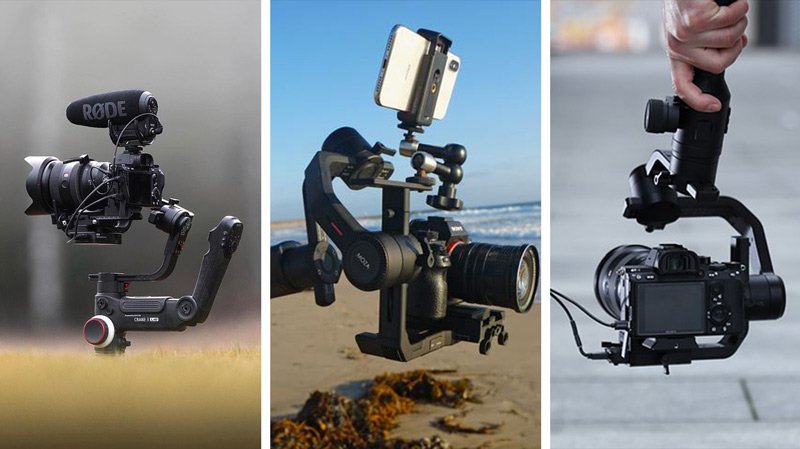 Content creation is growing every day, Whether It’s online or in the offline marketplace. We have more Sony cameras out there on the market ever than before.

But to get the most out of it, you need to stabilize and smooth the footage right?

That’s why we are here to give you the best possible list to make your videos much smoother & cinematic. We have collected the 6 Best Gimbal for DSLR and Mirrorless Cameras which is available on the market right now.

It’s up to you which one best fits your need and budget. All the gimbals are the best in their category, every single one has something to offer so take a time to read properly which they offer. Let’s see the list of the Best Gimbal for DSLR and Mirrorless Cameras.

This is one of the Best Gimbal for DSLR and Mirrorless Cameras right now. This gimbal is released at the end of 2019 and is one of the latest gimbals on this list which means one paper It’s going to have new and advanced features.

The WEEBILL-S is designed for mainstream mirrorless and DSLR cameras. It has decent load capacity and most importantly, unlike the DJI ronin sc It has long-distance between your camera eyecap and the motors so you can use any movement without worrying about anything.

The WEEBILL-S is a nice compact size and it folds down so it takes up very little space in a bag which is good for traveling. It’s also very lightweight and small which is perfect for a small mirrorless camera like the Sony a7 series, Nikon z series, and Canon EOS R cameras.

One of the downsides of the original Weebill Lab was its inability to balance heavier lenses. While we managed to balance the Sony FE 16-35mm f/2.8, G Master, on it, it often felt like we were maxing out the gimbal’s power.

We were also unable to activate Vortex Mode properly with the same camera-lens combi without removing the eyecup.

With the brand new Weebill-S, balancing the Sony FE 16-35mm f/2.8 G Master feels much steadier and the overall experience feels more responsive. Now you can even suspend the heavier set-up of the Sony 24-70mm f/2.8 G Master on it very quickly without removing the eye cup.

DJI just released the DJI Ronin S a couple of months ago which is one of the best gimbals for heavy cameras like Canon 1DX mark iii, and It has a maximum load capacity 3.6 kg which is insane you can pun any DSLR camera on this gimbal with any lens and the motors are also very strong, but the downside is It’s very heavy, and It doesn’t have locking mechanism just like on the Ronin SC and the Price is also higher too.

This is the perfect Gimbal for DSLR and Mirrorless Camera which has a bigger body size.

After some time DJI released the successor of the Ronin S which is the DJI Ronin-S Compact (SC), a single-handed three-axis gimbal designed for popular mirrorless cameras.

The Ronin-SC offers a highly compact design, high-grade materials, and advanced technology to open the world of creative possibilities for users capturing videos and photographs just like the It’s bigger brother Ronin S.

The Ronin-SC was created to be portable and travel-friendly, weighing 1.1kg – 41% lighter and 38% smaller than the Ronin-S – and can be taken apart to easily fit into backpacks and cases.

The reduced weight makes the Ronin-SC not only easily transportable but aids in reducing fatigue when using it on extended photo and video shoots.

The major part of deciding which system will work best for you is their camera compatibility and payload capacity and price also. So you decide which one is fit for your workflow.

This Gimbal is the go-to choice for DSLR and Mirrorless Cameras which is compact.

The DJI Ronin SC2 3-Axis Gimbal is perfect for producing exhilarating, smooth and clear video footage with your Mirrorless camera. As with previous mirrorless-friendly gimbals from DJI, the Ronin SC2 delivers plenty of power in a portable package; it weighs in at just 1.2KG but can competently manage loads of up to 3KG. The DJI Ronin SC2 is a travel-friendly gimbal, thanks to its lightweight build as well as its folding design that allows it to fit into a smaller backpack or gadget bag.

The Ronin SC2 delivers the smoothest and most stable footage ever from a DJI gimbal, thanks to the new titan stabilization algorithm, as well as SuperSmooth mode, which compensates for the smallest of unintended movements and allows the gimbal to be used with telephoto lenses up to 100mm. The DJI Ronin SC2 is perfect for run and gun style filmmaking and is suited to single-handed operation, right down to the handy front dial, which can be used for precise focusing performance.

Feiyutech who already has a proven track record with the Ak4000 has announced the lightweight and powerful AK4500. This new gimbal stabilizer is one of the lightest available for DSLR. Machined from ultra-light space-grade alum alloy and carbon fiber, the build and materials give the AK4500 a stylish look.

The AK4500 builds on the feature set of the AK4000 with faster response time and smoother control. However useful these gimbal stabilizers are there’s always the issue of flexibility, transportation, and size.

The AK4500 enables a series of angles and possibilities and features torque motor lock button design that can be used to lock 3-axis during leveling. The design also sees a detachable handle which enables the gimbal to pack down small into your kit bag for easy transportation.

Another feature that instantly stands out is the double layer quick loading board design that meets the specifications of Manfrotto’s fast-load and ARCA. As with the AK2000 and AK4000, the AK4500 is equipped with an LCD touch panel; through this, you can adjust focus, zoom adjust sensitivity, white balance, and other settings.

This is all made possible by the auxiliary expansion interface that features 3 multifunctional USB ports, follow focus kit, audio ports, and remote control. A new phone attachment makes it easier to connect your smartphone, which is a handy feature.

The Zhiyun Crane 3 LAB is a professional grade camera stabilizer. It has a load capacity of up to 10 lbs (4.5kg) and can carry a mirrorless, DSLR or small cinema camera.

The Zhiyun-Tech CRANE 3 LAB takes gimbal design in a different direction with the addition of a handle on top. With an included mini tripod attached on the bottom and this fixed, ergonomic handle on top, the CRANE 3 LAB can be used two-handed for optimal stability. This Gimbal works awesome for DSLR and Mirrorless Camera without any problem.

Moreover, the handle enables you to seamlessly switch to underslung mode. This is possible whether with one or two hands and achieve creative shots such as 360° roll shots as you move closer toward a subject.

In addition to this innovative design, the CRANE 3 LAB also packs other advanced features. Such as, wireless video transmission, and provides the ability to stabilize up to 10 lb loads.

The CRANE 3 LAB supports two optional servos at the same time for focus and zoom control directly from the handwheel on the side. Alongwith, all the other controls you need are provided at your fingertips at the top of the handle along with an OLED status screen.

MOZA Air 2 is a motorized gimbal stabilizer designed and developed for professional filmmakers. It features the 4.2kg (9lbs) payload capacity with 16-hour long working time. Moreover, it has Smart Time-lapse, 8 Follow Modes, “4-Axis”, Intelligent Operations, Compact Design. Also, it has MOZA Ecosystem including iFOCUS (Intelligent Wireless Follow Focus system) and a multifunctional Camera Backpack. Therefore, all your visual creative can be captured with the MOZA Air 2. This Gimbal is another good option for your DSLR and Mirrorless Camera.

Finally, the controls were, quite frankly, smooth like butter and straightforward. With all manner of fantastic modes for time-lapses, sports panning, and even an “Inception Mode”, all controlled through the MOZA App.

MOZA Air 2 includes a newly designed versatile and adaptable modular ecosystem to allow filmmakers to operate in whatever way is most productive for them. This means you can use the MOZA thumb controller, iFOCUS, camera cage, camera backpack, and dual handle.

This distributes control of gimbal pointing, FIZ, and camera control in whatever way makes sense for your shot.

The extremely portable, durable, and strong backpack provides easy transportation. It can’t only hold the gimbal with 3-axis but also holds a complete set of photographic equipment. Hence, it helps you to meet all your requirements.