by Rey Sagar March 8, 2021
Share 0FacebookTwitterPinterestEmail
Samsung, one of the biggest smartphone brands in the world has recently launched a new entry-level smartphone Samsung Galaxy A12 in Nepal. The A12 comes with the MediaTek processors and runs on One UI. The smartphone arrives with new and upgraded specs in comparison with its predecessor. We are giving you a piece of brief information about this smartphone so without any discussion let’s get started.

At first glance, you would think the Galaxy A12’s body is made in plastic, and you’d be absolutely right. It’s not just any plastic though, but a high-quality type that feels solid in hand. The model we got was in black and feels sturdy enough in hand. It doesn’t attract any fingerprint smudges either, which is absolutely great. The back surface also has some line textures for better grip, and the rear camera bump isn’t too big. 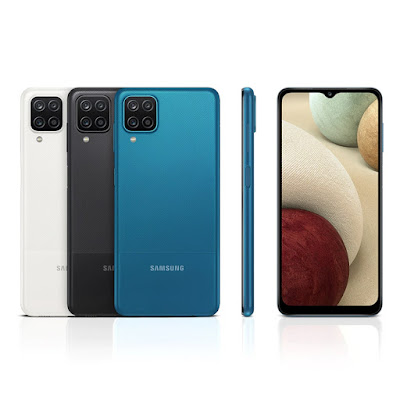 If you are looking for a great screen in this budget range I will definitely consider this phone out of the other range. It’s a decently-sized 6.5-inch screen that uses a PLS LCD screen – which according to Gamers Nexus, is developed by Samsung and better than the commonly-found IPS LCDs. 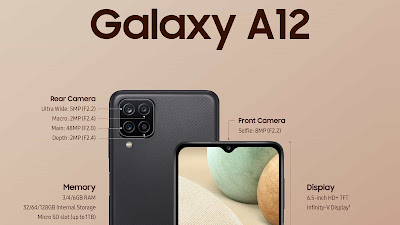 From my eyes, this 6.5-inch screen is definitely hindered by its 720p screen. The pixel response time is also noticeably slower since I can see motion blur when I swipe between home screens.

Samsung Galaxy A12 flaunts a quad-camera setup at the back. The company has upgraded from the 13MP primary camera on its predecessor to 48MP on the A12. It also has a smaller aperture of f/2.0.  Samsung is known for its great quality cameras even in the lower-end models so we can expect it will give users quality images.
The 5MP ultra-wide camera and the 2MP depth camera have been left untouched. On the other hand, Samsung has added another 2MP lens for macro photography. For selfies, there is an 8MP camera inside the Infinity-V notch.

Samsung Galaxy A12 Price In Nepal

Samsung Galaxy A12 is launched at the price of Rs. 18,999 for 4GB/64GB a variant in Nepal. The smartphone’s available for purchase in official Samsung stores all around Nepal. It will be also available in the other stores as well. The phone competes with other smartphones at this price segment for superiority in the Nepalese market.

So, what are your thoughts about this budget smartphone from Samsung? Are you excited to get your hands on a new Samsung Galaxy A12 in the crowded budget segment? Lets us know what is your thoughts on the comment section below.

💨 Meizu 18 and Meizu 18 Pro launched with 120Hz display
💨 Top 5 Smartphone brands in Nepal | Guess which brand has No.1 Spot?
💨 iPhone 13 features bigger battery and 120Hz display and reset without a Lightning cable?

iPhone 13 features bigger battery and 120Hz display and reset without a Lightning cable?