Read Now
Transcribe YouTube Videos Into Text | Convert Without...
How to view NTC or Ncell call details...
How to Change wifi password by PC |...
How to View Saved WIFI Password on Android...
How to Hide WIFI Network Name From Mobile...
How to Write SEO Friendly Blog | Best...
How To Make Awesome YouTube Thumbnails For Free...
How to Earn $100 A Day With Google...
How to make bootable USB or Pendrive for...
How to delete or remove Gmail ( Google...

No more likes on Instagram? In Australia, Canada and five other countries

Instagram one of the biggest social media platform for sharing photos and videos is giving more option for the users to hide the likes count on their posts.

Instagram Starts Test To Hide Likes for Users in 7 Countries

The new test is started experimenting with several countries starts with Ireland, Japan, Brazil, Australia, and New Zealand. also in Canada. Instagram says if we do this It would be less toxic and more healthy for users to pay less attention to fake impressions and focusing on the contents.

Selected users will get a banner notifying message after the changes applied on a particular account.

“We want your friends to focus on the photos and videos you share, not how many likes they get. You can still see your own likes by tapping on the list of people who’ve liked it, but your friends will not be able to see how many likes your post has received,” the company, which is owned by Facebook, said in a published statement.

They also twitted on their official Twitter handle by giving the new of this change. 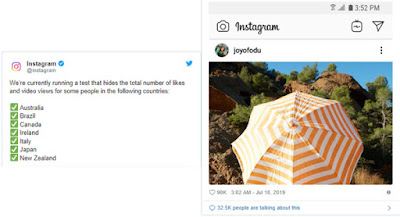 The Account owner will still be able to see how many likes they got but their friends and followers will only able to see the comments and they don’t have any idea about likes.
Also, Read – Instagram Updates in 2019 IGTV on feed and new explore tab
They also some change on the banning accounts now you will be notified before you get banned from Instagram or deleted your account from Instagram which is actually a good thing for the users they will be able to know they did something wrong or misuse the Instagram account policy just like in the picture below. 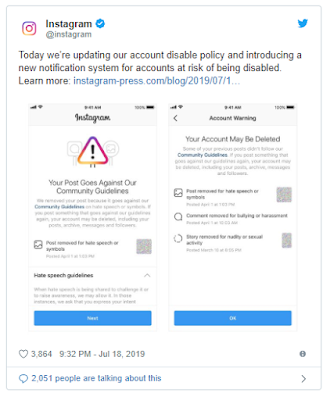 The reason behind this experiment?

We all know Instagram is owned by Facebook so Facebook already run this test in the past and the main reason for this test is they just want users to focus on their contents instead of how many likes they got and It is also good for the small influencers and Instagrammers who don’t get so many likes.
Instagram started hiding like counts of users in Canada back in April 2019. “We are testing this because we want your followers to focus on the photos and videos you share, not how many likes they get,” a spokesperson told TechCrunch at the time. 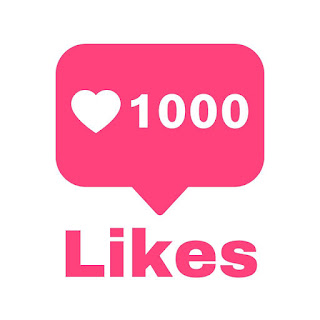 There is also various news on and controversial blogs social media obsessions with heightened risks of depression, sadness, loneliness, and envy – as well as a marked drop in self-esteem. If you focus on these things it makes sense that Instagram is making an effort to make its platform less threatening to users.

1. Less Pressure and No Judgment

We all are humans and we measure our success against the success of others which is not a good thing but we do. We judge looking at how many likes our competitors Instagram post gets against ours. Sometimes we could even imagine our competitors looking at how many like they got, quietly judging us, considering us a failure.
A lot of peoples think if someones have more likes and more engagements their work is better than the someone who has not so many likes even the work is better. sometimes we also judge ourselves with other competitors and we feel discouraged because they got more likes than us.
A world without public numbers is felt quite different, however, It will put an end to the pressure of chasing Instagram likes and fears of being judged by others.

The number one proof we can from the influencers based upon how many likes they get on their posts and if we can’t see the likes count It’s very difficult to decide how many likes they get in a daily basis.
More importantly, Instagram itself uses likes counts to help them rank posts as “top posts” in the hashtag feeds and the marketers use this like engagement to discover their influencers. We don’t have any idea about the top post algorithms right now but if it affects the the top feed we have to work much harder to find influencers. 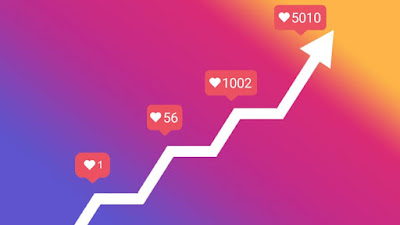 If we lose to see the likes on Instagram There is another thing that will help you to decide your engagements which is a comment. Comments have always been a stronger signal of influence, it’s something that’s harder to discover at the swipe of a finger and you’ll always get fewer comments then the likes counts.

It’s very easy to say that likes don’t matter, but unfortunately, they do. How much do you trust a brand that doesn’t get engagement on their posts? we can’t trust the brand which doesn’t get so many likes and attention of users right.
A brand with a large follower count and no Instagram likes could suggest that all the followers are fake. Online and offline, we look to others for signals on how to behave. When we see a lot of people like an Instagram post, we’re more likely to like it ourselves. This phenomenon is known as social proof. You might don’t like this it’s a reality of digital marketing.
But not everybody is excited about hiding like counts.
Adam Liaw, a chef, and author in Australia with more than 100,000 Instagram followers said on Twitter that he thought the change was a “huge mistake” that would ultimately lead to the death of Instagram.

What do you think is it good or bad give your point of view on these new changes in the comment section below.
You may also like :

How to change your Name on Facebook in pc