by Rey Sagar November 11, 2020
Share 0FacebookTwitterPinterestEmail
The new upcoming WhatsApp disappearing messages feature is now rolling out on both iPhone and Android, allowing users to specify that their message should automatically delete from your device after a set time has passed. The time is mention by a lot of trusted rumors is 7 days, but the company is open to feedback on whether it should be longer or shorter which is also great news from the user’s point of view.
Whether you might like this feature or not, Some like disappearing messages because it ensures that personal messages are not hanging around forever, while others just like group chats to be made more manageable by being limited to a week’s worth of posts and the rest of the messages are basically useless. It’s important to point out that there are cases where messages could still be viewed even if the feature is enabled if you want to read later.
As per WhatsApp, the new  disappearing messages feature cases :
The WhatsApp messaging service is used by more than two billion people globally and this feature might help some users or it might annoying for some because not everyone wants to delete their messages after 7 days.
“Today, WhatsApp messages often live on our phones forever. While it’s great to hold onto memories from friends and family, most of what we send doesn’t need to be everlasting”, a WhatsApp blog post said. “Our goal is to make conversations on WhatsApp feel as close to in-person as possible, which means they shouldn’t have to stick around forever. That’s why we’re excited to introduce the option to use disappearing messages on WhatsApp.” 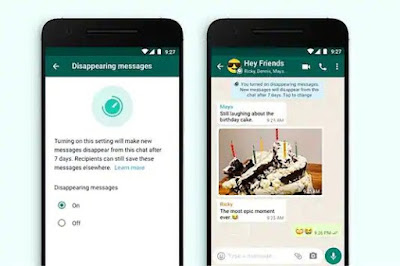