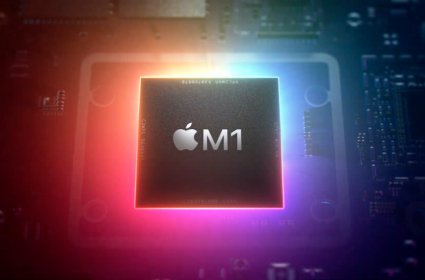 After the apple new event on 10 November, Apple first major plans to transition the Mac lineup away from Intel back at WWDC. Since 2006 Apple Mac lineup has used Intel processors, but the transition to Apple Silicon means that the Mac will be using Apple’s own processors which are basically made by apple itself. This is similar to the iPhone and iPad, where Apple uses its A-series processors.
When Apple controls the silicon in a Mac it can offer significantly better software optimization and battery efficiency. More importantly, In the case of Mac, this means that macOS 11 Big Sur is optimized specifically for the M1 processor. By creating the silicon in-house, and this will help Apple to more control over how well macOS and a Mac perform together. Even without touching on the technical specifications of the new M1 chip, the improved optimization in macOS should make a big impact on performance and reliability improvements.

M1 also features a unified memory architecture that brings together high-bandwidth, low-latency memory into a single pool within a custom package. This allows all of the technologies in the SoC to access the same data without copying it between multiple pools of memory, further improving performance and efficiency.

We can except the iOS app compatibility is not the main reason Apple chose to put Arm-based CPUs into the new MacBooks. Frankly, the real reason is that Apple wants to control its own product and technology destiny, instead of relying on chip partners like Intel and AMD which is basically 2 different platforms and apple has no control over them. Plus, the tremendous success they’ve had with this strategy in iPhones, iPads, and Apple Watches has encouraged them to finally extend this approach to the Mac as well. 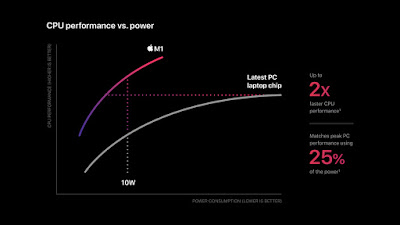 There is a bunch of reasons why Apple chose to develop the M1 chip and use it in these new Macs, all of which were on display at Apple’s launch event. First, for the two notebooks, the company highlighted the additional battery life that the M1 chip brought to the MacBook Air and MacBook Pro (up to a 10-hour increase for video playback on the MacBook Pro with M1 versus its predecessor, for example). Some people also thought (and hoped) Apple would lower prices on Macs with its own chips, but that only occurred on the Mac Mini desktop, which is now $100 lower than its predecessor.
Four high‑performance cores
M1 features four performance cores, each designed to run a single task as efficiently as possible while maximizing performance. The high‑performance core is the world’s fastest CPU core when it comes to low‑power silicon and because M1 has four of them, multithreaded workloads take a huge leap in performance as well. 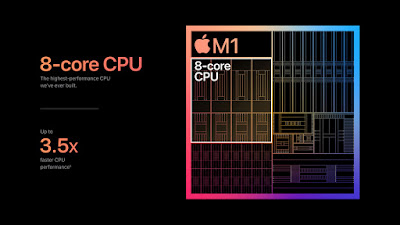 Four high‑efficiency cores
M1 has four efficiency cores to handle lighter workloads. They use a tenth of the power while still delivering outstanding performance. These e‑cores are the most efficient place to run lightweight tasks, allowing the performance cores to be used for your most demanding workflows.
How Fast Is the M1 Chip going to be?
If you listen from Apple, the M1 chip is faster than the Intel processors in the Macs it replaces and we have already seen a lot of rumors about it. In some cases, the company claims, it’s much faster than other intel processors before which is going to help massively for some of the optimized applications. The general performance of the M1 MacBook Air is 3.5 times faster than before, while graphics performance is five times faster, Apple says. On the M1 MacBook Pro, AI computation is 11 times faster than before, and Apple says that it can build code in the Xcode app up to 2.8 times faster.
Also, Read:
Best site to buy apple products in Nepal | 2020 update
Apple announces First Apple Silicon products
Share 0 FacebookTwitterPinterestEmail

How to transfer the balance from NTC to NTC | 2021 Updated