Xiaomi’s Mi Mix series is one of the most innovative smartphone lines around, you might have already seen those amazing design mi mix phones with rounded displays in the past, but sadly we haven’t seen a new phone since the Mi Mix Alpha in late 2019. Now the good news is Xiaomi has already confirmed on Weibo that its March 29 event will play host to a Mi Mix which is absolutely exciting. 😁😁

Mi Mix phone has been certified at the MIIT in China with up to 16 GB of RAM and 512 GB of storage, too. You can check out the post below, where Xiaomi released for this launch is quite interesting, you can see that plenty of things are going on here. 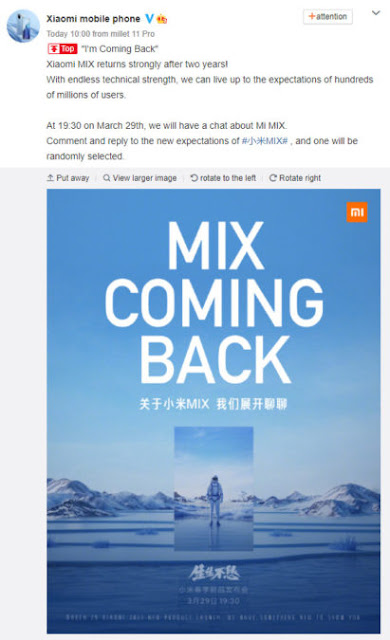 There is also the possibility that this device could be non-foldable too. The Mi MIX Alpha with its wraparound display came out at a time when multiple OEMs were said to be working on foldable, so we wouldn’t put it past Xiaomi to be working on something along the same lines once again. With the MIX 4, Xiaomi could be attempting to bring a more refined version of the product to the mass market, as the Mi MIX Alpha never went on sale in any region. We’ll have to wait and watch to see what Xiaomi has in store.

We hope that Xiaomi is going to offer a peek at its new foldable phone. That is unless it plans to show off some other Mi Mix device that the company has managed to keep under wraps.

Fun fact, the Xiaomi Mi Mix was the first Android smartphone to break away from the standard at the time 16:9 aspect. The Mi Mix had a 6.4-inch 17:9 LCD panel with minimal bezels and opened the door for modern super-tall displays.

We expect that more details related to the upcoming foldable smartphone could surface online in the coming days, stay in touch for that.