Xiaomi is a well-known brand in India for their budget smartphones with great build quality and performance this time Xiaomi decided to go far beyond of their budget range and here we have the new Xiaomi Redmi Go which is priced at 4,799 we can’t go wrong with this device in terms of the value. Redmi already released their first version of this device which has 8 GB of internal storage and 1 GB RAM at a price of Rs 4,499. Now the company decided to upgrade the internal storage.
Also, Read – Realme X release date, price, specs and more

This new generation of the Xiaomi Redmi Go has the same specs as the previous version which has decent specs like 1 GB of RAM, HD+ display and a Snapdragon 425 chipset. The design, Features and other specifications of the new generation of Redmi Go remain the same as the 8GB storage variant Redmi Go, except the change in internal storage which is going to be 16Gb instead of 8Gb. But the RAM still the same which is a bit of a downside if you are going to use for day to day task 2Gb could be a better option but still, the price is very low so you can’t go wrong with this. The device is going to available from today at a price of Rs 4,799 on mi.co, Flipkart website or Mi Home stores. 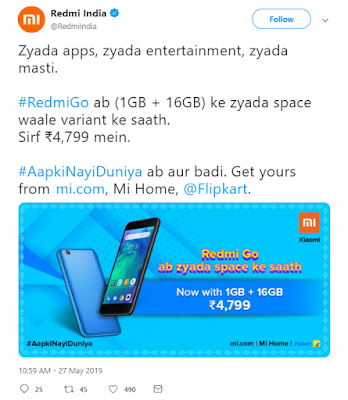 Redmi Go features a 5-inch HD screen with 720p resolution which is not a full HD display but if you see the price 720p is also very good, The display comes with the 16:9 aspect ratio, which has 296 PPI. The device has midrange chipset Qualcomm Snapdragon 425 quad-core processor along with Adreno 308 GPU.
This variant comes with the 1GB of RAM and 16GB of internal storage, and the good thing is you can expand the storage up to 128GB with a microSD card. Xiaomi Redmi comes with the latest version of Google’s Android 8.1 Oreo (Go Edition) and is backed up by a 3,000mAh non-removable battery, Company claims the battery is going to last 10 days of standby time.
Also, Read – Android Q Top Features and release date
On the camera part, Redmi Go has 8-megapixel rear camera with f/2.0 aperture and also has a single LED flash option. In the front camera, It has a 5-megapixel camera, with an f/2.2 aperture. It has dual-SIM support, 4G, Wi-Fi, Bluetooth 4.1, and a micro-USB port. The Redmi Go measures 140.4×70.1×8.35mm and weighs 137 grams. But the phone doesn’t have features like fingerprint sensor, USB-c and face unlock. Xiaomi Redmi Go which is expected to available in Black, Blue color.
Android: v8.1 (Oreo)
Performance: Quad Core, 1.4 GHz Snapdragon 4251 GB RAM
Display : 5.0 inches (12.7 cm)HD, 294 PPI IPS LCD
Camera: 8 MP Primary Camera LED Flash 5 MP Front Camera
Battery: 3000 mAh
Share 0 FacebookTwitterPinterestEmail